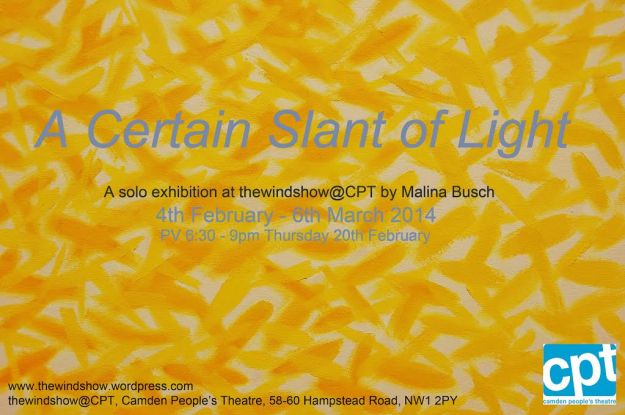 thewindshow@CPT is delighted to announce Malina Busch’s solo exhibition A Certain Slant of Light from the 4th February to the 6th March 2014. We hope you can join us for the Private View on Thursday 20th February from 6-30 to 9pm at Camden People’s Theatre.

Malina Busch’s artwork explores the relationship between ephemeral experience, memory, and material. Using the physicality of paint, she considers the changes and shifts that occur in nature. A Certain Slant of Light will examine how the nuances of material touch can act as point of exchange between the artist and the viewer, altering the viewer’s perception of an artwork.

The exhibition will highlight Busch’s most recent series of three-dimensional paintings which bring together visual ideas found in sculpture, drawing, and printmaking. Made up of folded and pleated canvas structures in strong opaque colours that have been shaped, bound, and tied; these pieces reinvent the surface of painting in order to produce a new experience. She says of her artwork “for me, the surface of an object is a place where elusive moments can be transformed into tangible spaces. Each painted mark or folded crease suggests an action which has already occurred, but where its memory has lingered through the marks that it has left behind.”

More examples of Malina Busch’s work can be found on http://www.malinabusch.com